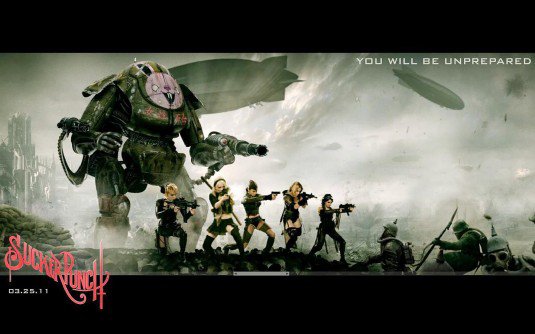 I prepared for writing this review by taking a shit. Taking a shit is an awesome, Zen experience. It’s also one of the only times a man can sit around on his ass without a woman bitching at him. In either situation, shit pours out of a cavity somewhere on the human anatomy, but in the case of dump-taking, your asshole doesn’t call you lazy or abusive or an alcoholic or all of those other baseless names that women like to call the people who provide for them. As a matter of fact, some of the best ideas I have ever had have occurred to me while I was taking a dump. Like writing this review.

Sucker Punch isn’t a movie about shitting. I did not pay money to watch a woman take a crap as I am not German or Japanese enough for such things to appeal to me. Seriously, what is it with those nutjobs? It’s like they both get their shit rocked in WWII, and all of the sudden they are obsessed with smearing shit all over each other’s faces. Italy lost that war too, and you don’t see them taking up the habit. They settled on much more productive behavior, like beating their wives and being hairy. And people complain about the short term effects of war, like death, which kicks ass. Did you know that in Japan, you can pay to sit in a glass box and watch a woman on top of the box take a shit? And if you think that’s gross, there is a bar in the Philippines where they hold a contest to see who can shit on the face of one of the strippers there. The rules are simple, the stripper lays down beneath a chair with the seat part removed, and blows air through a straw on your balls (which makes you recoil and clinch) while she dips and weaves. If you are able to shit on her face successfully, you get free drinks for the rest of the night. A guy I knew who was there had really bad diarrhea, so the first thing that occurred to him was that he wanted free drinks the entire night. He volunteered, and before the stripper/victim was even fully in place, he let rip a brown tide all over that dumb slut’s entire head. The bartender was so mad that he kicked my friend out of the bar. Now I know what you’re thinking, he won fair and square, so he should have been rewarded with his promised free drinks. But if you’re an optimist like me, getting kicked out of the bar means you don’t have to pay for your drinks, so I guess the barkeep was true to his word after all, not to mention it was one of the single funniest things I have literally ever seen in my entire life, ever, and I once saw a man getting beat up by a fat chick with a double-headed dildo at a party.

Normally that would be shocking to people, but considering enough of us have probably been exposed to jap-hentai-porn and its associated fetishes like “shitting dick-nipples,” it is obvious to us that they can do much worse. Japanese porn has got to be the biggest novelty in the entire history of the world, even compared to those places in Africa where they chain women to the insides of huts and feed them for months on end before their wedding to make them fat. Now chaining up women I’m all for, but why must you doom every man in your tribe to fucking fat chicks for the rest of their lives? No wonder that continent is so underdeveloped, all the men must be too busy killing themselves out of shame for their fat wives to live long enough to build anything. And even if the women weren’t morbidly obese by default, it’s not like they would have built anything in the past six thousand years anyways. Women can’t do shit.

Note that in the paragraph before I used the word “novelty” instead of calling it “unnerving.” That’s because nothing disturbs me anymore. I grew up with an internet connection. I’ve watched guys shove broken pickle jars up their asses, I’ve seen videos of Taliban beheadings. Hell, I’ve even been able to sit through and stomach atrocities like this.

So the fact that a bunch of Japs get their rocks off to animated cartoons of women with green/blue hair and way-too-large eyes that are ironically un-slanty getting violated by minotaurs with two dicks and rapetastic tentacles for a tail really isn’t all that shocking for me. What is shocking for me is that sometimes, while you are meditation on your toilet seat, having your brief, quiet, enjoyable visit to Shangri-La, some people will sometimes try to take that away from you. Have you ever been fucked with while you’re trying to take a shit? It is the moment when you are most vulnerable. Public restrooms are the worst for this, because people can put things into your stall or take them out (such as a backpack in a school shitter), pour a bottle of water over the top of the stall all over the toilet paper, or even worse, stick their dick in a hole between the stalls and expect you to suck on it.

Come to think of it, shit like that is hilarious. I love fucking with people while they are taking shits. I mean, if they decide to do anything about it, they either have to run out of the stall without wiping, smearing their underwear with shit, or they have to run out of the stall with their pants still around their ankles and their undoubtedly tiny dicks waving around before they inevitably trip and fall. Man, stuff like that cracks me up.

I know what you’re thinking: if I was on the receiving end of such treatment, I wouldn’t think it was so funny. Actually, you’re fucking wrong. If I were ever on the receiving end of such treatment, which I haven’t been, because people are too afraid to fuck with me because they know I’m awesome and ballsy as fuck, I would think it was hysterical because I would probably fuck their girlfriends or their mothers as revenge. The clincher is that after I finished with them, I’d totally take a shit on their chest and revel in the irony as I laughed my way all the way out the front door. And THAT is why fucking with people while they take a shit is so god damned hilarious, because either way I win and they lose.

Anyways, so Sucker Punch was a pretty fucking cool movie. There were a bunch of hot sluts in a psych ward (crazy women, who’d have thought?), and when they are made to dance all sexy-like for people, they instead escape and walk around in skimpy outfits drop-kicking ten foot tall samurai robots with Gatling guns and blowing up trains on Titan, the moon of Saturn, or using giant mechs to shoot down Second Reich Zombie Robots and their stupid zeppelins (Oh the humanity!), all the while being mentored and armored by Dr. Spock. Oh, and there was this one scene where Baby Doll, the “heroine,” spites a dragon by killing it’s newborn baby right in front of it. How much ass does that kick? I don’t know what the dragon did to deserve it, maybe it looked at her funny. Maybe it didn’t do a God damned thing, maybe Baby Doll is just so much of a beast that she runs around killing babies for the hell of it. I know I do. In the end one of the psycho chicks (crazy women, who’d have thought?) escapes the ward and runs off, cuz that’s all women are good at is running away from the problems, while the protagonist, Baby Doll, stays behind and gets a lobotomy, which is revealed to be the first step toward a happy and successful marriage.

If it sounds awesome, it is. If it sounds familiar, it should. It is basically a sexified CGI remake of “One Flew Over The Cuckoo’s Nest,” only instead of starring Jack Nicholson, it stars a psycho bitch (crazy women, who’d have thought?) spiteful baby killer. And to bring the review full circle: did you know that Jack Nicholson gets his asshole bleached every week so he can look pretty when he shits on hookers? You think I’m making this up. I’m not.

📂This entry was posted in General Manliness Movies The Classics
« The Greatest Holidays You’ll Never Celebrate Preview Of “S.T.A.L.K.E.R. 2: Shadow of Fukushima” »