POWERBARs
POWERbars are supposed to supply you with POWER before a workout so you can CRUSH WEIGHTS and run marathons and whatever else people without sex lives do. The secret to the Powerbar’s awesome POWER is dubbed the “C2 MAX energy blend,” which contains the following ingredients: Evaporated Cane Juice Syrup, Maltodextrin, fructose, and dextrose. What is the mystery behind these intense energy-providing nutrients? Let’s take a closer look. 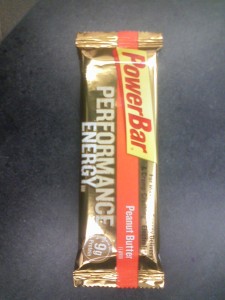 Evaporated cane juice syrup – sugar without the vitamins leeched out. It’s the exact same plant as cane sugar, just not as processed. But it’s still sugar.

Dextrose – another name for glucose, which is natural plant sugar.

“Healthy” candy
If you walk down the candy aisle in any grocery store you are bound to come across what I categorize as “healthy” candy. What exactly is healthy candy? Healthy candy is just candy. Plain old chocolate bars. What sets them apart from “unhealthy” candy is about a penny’s worth of ink on the label. Take this Baby Ruth for example: 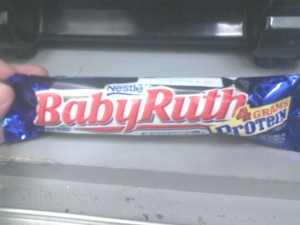 “4g Protein per serving!” the label proclaims excitedly. HOT DAMN! Nestle finally found a way to build muscles through chocolate! A closer inspection of the back label, and one will discover that in the same serving that contains 4 grams of protein!!!!!, it also contains 33 grams of sugar. You heard me. 33. Now all of this is an acceptable trade off for the mad amount of muscle-building protein in the same said serving, correct?

It is the generally accepted wisdom that the average human under average circumstances needs one gram of “high quality” protein (i.e. eggs, milk, meat etc) per two pounds of body weight per day. The average male weights 180 pounds. That means he needs 90 grams of protein a day. In order to get that amount of protein from eating Baby Ruths, he would need to eat 23 ½ of them each and every day, i.e. 775 ½ grams of sugar. Over ¾ of a kilogram of sugar, I would suspect (and correct me if I’m wrong [I’m not]) is far more sugar than one human being can or should intake on a daily basis just to get the MASSIVE BENEFIT OF 4 GRAMS OF PROTEIN PER SERVING!!! found in a Baby Ruth. Goobers are another example of this retarded marketing scheme:

Other candy bars of course fall victim (and hope you do the same) to a similar kind of labeling. 100 Grand bars, for example, proclaim to have 30% less fat than other candy bars. But when you consider that one 2 oz 100 Grand bar also contains 22 grams of sugar and STILL contains 13% RDA fat in one little “serving,” the nutritional impact of choosing a 100 Grand bar over say, a bag of skittles, is precisely dick.

Doritos JACKED:
HOLY SHIT. EXTREME MARKETING! Just holding the extreme bag of extreme flavored chips is giving me both an extreme hard on and an extreme migraine from how extreme this bag of powdered corn strips is. As you can see here, I am holding a bag of “Doritos JACKED (yes the word is actually capitalized) Smokey Chipotle BBQ”.

I assume they gave it such a quaint name because the title “Doritos JACKED Blackout Hickory Wood Smoked Chipotle Chili Pepper Mesquite BBQ Flavored Corn Chips” wouldn’t fit on the bag, but damn, that would be an extreme name worthy of such an extreme snack food. Below the punch-in-the-eyes all-capitol JACKED logo is the greatest catch phrase I have ever seen. “BIGGER. BOLDER. THICKER.” Holy shit, I just bought a bag of porn from 711. I assume this because the only time the words “BIGGER” and “THICKER” should appear on a package is when that package contains a DVD full of hot sex in it.

And while we’re on the subject, THICKER Doritos don’t lend to flavor, they don’t lend to a “fulfilling snacking experience” like the bag advertises, all they do is make the chips taste stale as fuck. The JACKED BBQ flavor powder that permeates every chip, when mixed with saliva, creates a paste that can unfortunately be best described as thick and spicy. Having this disgusting paste in my mouth makes me feel like I sucked off a gay pepper’s dick. Speaking of gay and speaking of peppers, let’s talk about…

Mexican food
While delicious, Mexican food is unoriginal as hell. Almost everything you can order in a Mexican restaurant is just a different combination of a few key ingredients, usually being refried beans, rice, cheese, a tortilla, and maybe some beef. And no matter what shape your tortilla is folded into, it won’t stop you from getting diarrhea. When I go to a Mexican restaurant I usually just order the cheapest item on the menu and then rearrange it on the plate to what I wanted originally. Want an enchilada but a burrito is cheaper? WHAT IS THE FUCKING DIFFERENCE?!

Cracked JACK’D
There we go with the JACKED EXTREME marketing again. Apparently the next step from EXTREME marketing is to add caffeine to anything that can possible contain caffeine, that way you can get totally twacked out and get kidney stones from chapstick, gum, toothpicks, dermal patches, and now caramel corn. I don’t know about you, but whenever I get back from a night of MMA training, beating my girlfriend, strip clubbing and afterpartying and I have work the next day, I always reach for my bag of cracker jacks to put the skip back in my step. I’m not willing to try and prove the following theory, but I’d wager that this abomination of outdated snack foods and bro-core marketing has a taste somewhere between a used diaper and the liquid ass that fills it.

What kind of market is this particular snack food reaching out to? Its the answer for a question that no one ever asked. And the reason why no one ever asked it is because it is a retarded fucking question to begin with. Who the shit still even eats cracker jacks? Not even hipsters eat that shit to be ironic. Is this the brand’s attempt at becoming relevant in the marketplace again? The kind of people that run companies like PepsiCo (who makes Cracker JACK’D) and pitch all of their half-baked ideas to paid “focus groups” think they know what is “hip” in the minds of kids today. Your pop culture is manufactured and fed to you by these aging, crusty, rich douchebags by decree, and apparently, these people have decreed that you aren’t bombarded with enough bullshit in your daily life. It all boils down to stupid people trying to analyze stupid trends in stupid kids to come up with stupid products with stupid marketing schemes and stupid gimmicks to lure stupid consumers into buying their stupid shit.

Do we even need more ways to consume stimulants in this day and age? The amount of every day items that now contain caffeine is embarrassing to society.

Wouldn’t it be easier to just get a decent night’s rest? Maybe stop playing Call of Duty til four in the morning when you have to work the next day, or tell the baby to shut up and change itself? When stupid people don’t take responsibility for their own stupid problems, everyone gets loaded down with useless “solutions” like this for the rest of their lives. If you are too much of a worthless sack of shit to budget your time enough to get sleep to the point where you need everything you touch to have caffeine in it to keep you going, you should die of sleep deprivation anyway.

Decaffeinated coffee:
It’s a little known fact that coffee tastes like shit. The only reason someone should drink it is to wake up in the morning and without caffeine, all you have is a mug full of motor oil. Anyone who drinks a beverage that needs six spoons of sugar, 4 oz of milk, and a mountain of creamer to be made palatable is missing the point of having something to drink. Matter of fact, any beverage that needs more than a slice of lime to taste good shouldn’t be a fucking beverage to begin with. Why the fuck would someone subject themselves to drinking the foul tar if it weren’t for the benefits of caffeine? Whoever drinks decaf is a hipster tool.

It is a medical fact that a coffee enema can cure a migraine headache, which is ironic because coffee looks and tastes like it came out of a sick person’s ass to begin with.

Budweiser:
Sorry folks, Budweiser is fucking disgusting. It’s a beer for retards who believe everything the TV tells them. If Bud is the “King of Beers,” then the kingdom of beers must consist of carbonated shit and the tears of orphaned children in order for Bud (or its down-syndrome cousin Bud Light) to even be considered an alternative, let alone the best thing around. The fact that Bud sells so well in America is a testament to how easily morons like you get suckered into shit by retarded marketing schemes. Granted, most of the people who drink Bud are sports fans, and if you can convince him that bouncing a rubber toy around a grass lot for five hours is entertainment, you can trick a man into paying nine dollars at said ball game for 16 ounces of this crap. I would rather get drunk off of mouthwash than this liquid bubbly spew, and the same goes for this shitwater’s rivals Miller and Coors as well. And just for the record, Guinness sucks too. Bread was never meant to be drank.

Almond Milk:
And while we’re on the subject of stupid things that people drink, let’s talk about the natural impossibility of almond milk. First off, almond milk, for the most part, is made by soaking ground almonds in water and then blending it. That’s all. Why not just eat the damn almonds and cut out the middleman? It is basically dirty water, and it tastes like it was mixed with chalk, not a raw nut. Almond milk is favored by vegans and other assorted crybaby pussies, and some health-food nuts love it because it contains no cholesterol. You know what else it doesn’t contain? Protein. The nutritional value of almond milk is so negligent that you would probably get malnutrition substituting it for anything in your diet other than tap water, which is basically what it is to begin with. If the water table in your area is anything like it is in Phoenix, what comes out of your tap may arguably be healthier for you. The water table here is so hard that all of the dissolved calcium, lime, fluoride, and whatever the hell else they add to it probably has more nutritional value that this cop-out chalk vomit. You want to find a use for almond milk? Dry it out and let the neighbor’s kids use the powder to draw on the sidewalk with it. Maybe they can write up a warning sign outside of your house to let bystanders know that a dumbass lives there. You want a healthy beverage? Drink breast milk, preferably right from the source.

Honey Buns:
The only honey buns I want near my mouth is my girlfriend’s (see above). Take a look at this disgusting piece of shit: 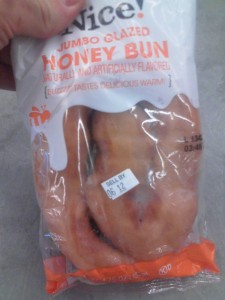 It looks like a vegetarian turd covered in semen. There’s a gay sex joke/vegetarian insult in there somewhere, but if I have to spell it out for you, you have no business reading this.

Corn Dogs:
Microwaved breaded dick meat on a stick, exactly what I wanted for lunch!

📂This entry was posted in General The Classics Things That Suck
« Preview Of “S.T.A.L.K.E.R. 2: Shadow of Fukushima” The Expendables »