If history books talked about the lives of everyone who had ever lived, history would be the most boring and drawn out anything in history. Leaf through any history text you can find and you can bet that only those who during their lifetimes achieved the greatest of things have their named printed in the hallowed halls of the world’s greatest. It is with this in mind that I will say to you this: the late, great, Master of Metal Ronnie James Dio is absolutely without question a great historical figure. Dio isn’t just a rock god, Dio is THE rock god. No man or woman, from Kurt Cobain to Tupac to Mick Jagger to even Dio’s contemporary and peer Ozzy Osbourse has had as much influence on music as he. The only people I can even imagine having as much influence on music in general as Dio would be Elvis Presley, MAYBE Frank Sinatra, and Leo Fender, the Henry Ford of electric guitars.

You may ask yourself, how does this man have so much influence on music as a whole? Well the answer is simple, and for once, I am not exaggerating: Ronnie Dio invented epic music. Not the played out modern bastardization of the word epic, but the textbook definition of it as something being awe-inspiring. Now in order for you to fully understand what I mean by that, I will need to take you on a bit of a history lesson. Dio had been playing in various rock bands since the middle 60’s, having modest success with his bands such as “The Vegas Kings,” “Ronnie and the Red Caps” and “Ronnie Dio and the Prophets.” In 1967, Dio’s meteoric rise began with the inception of his band “Elf.” At the time, there was really no breaking ground. Rather, Elf was more of a launch pad for Dio’s career. Elf ran strong until 1975, and received some attention from major forces in the proto-metal scene, including Deep Purple, whom Elf routinely opened for on tour. This is where history is about to be made. In summer 1975, the first ever guitar god, Richie Blackmore, got fed up with his band Deep Purple’s increasingly homo R&B direction, and decided to tell the rest of the band where to stick it. Now at the time, this was a momentous event, as Blackmore was already established as the most incredible face-melter of the time (which, if you go back and listen to some of his works, remain true even to this day), and Deep Purple was easily one of the biggest bands of its era. Nonetheless, Blackmore decided to go his own way, and lo and behold decided to recruit Dio and his band Elf to help him forge a new path of metal that would bring the music world to its knees. Dio and Blackmore decided to name their new endeavor “Rainbow,” which admittedly sounds like some obvious gay-bar pop band a la Bear Force One. Nothing, again, could be further from the truth. Before the rainbow was a symbol of gay pride, it was what the Norse Gods walked on to travel between worlds. Rainbow ended up becoming one of the greatest and most influential Heavy Metal bands OF ALL TIME with twin unstoppable powerhouses Dio and Blackmore on vocals and guitar, respectively. It only took them one year to release their second album, easily the most epic album of all time, the incredible and venerable “Rising.” Just a look at the cover art of this album says it all:

If that isn’t enough to convince you of the album’s sheer worshippable status, one listen to it will change your mind. The album opens strong with the song “Tarot Woman,” and then repeats everything it did right in its first song with the following two, “Run With the Wolf” and “Starstruck.” Three amazing songs in a row, and oh how the band is just getting started. Their next track, “Do You Close Your Eyes” is regrettably and admittedly crappy, with the lyrics revolving around Dio asking awkward sexual questions to an anonymous woman. The whole song is VERY un-Dio. I discovered that Blackmore was consistently pushing Dio away from his favored style of music into Blackmore’s preferred radio-friendly brand of metal, but more on that later. Just when you start to think that one rotten apple can ruin the whole bushel, you turn the vinyl around and begin playing side B. Now there are only two songs on side B, and the reason for that is because they are both over 8 minutes long. “Stargazer” and “Light in the Black” are bar-none, hands down, two of the most amazing songs ever recorded, and I demand that you go and listen to both of them as soon as you can to see exactly what I mean. The whole album, not to mention the latter two songs on it, was so beyond-words-awesome that literally the first thing that Kerrang Magazine EVER did (as in, in Kerrang Issue #1) was declare “Rainbow Rising” the best album of all time.

Ronnie Dio had a long and towering career after this event, including one more album with Rainbow before coming fed up with Blackmore’s constant proddings towards radio metal , he jumped ship and took the reins of Black Sabbath from the Ozzman and eventually forming his legendary solo career and bringing “Holy Diver” to the world.

Think of some bands that these days can be considered proprietors of powerful, creative music; for example Nightwish. Or how about Iced Earth? Even Iron Maiden is predated by Dio and his efforts with Rainbow. I can think of one song that predates Rainbow Rising’s invention of truly epic metal, and that is Deep Purple’s Highway Star, a song that yep, Richie Blackmore wrote. But now you may be asking yourself, how is he more important to metal than Ozzy himself? I mean, Ozzy is admittedly more well-known as the “Prince of Darkness” and the authority of heavy metal, but consider this: Ozzy and Dio had just as much part in creating the sound and laying the groundwork for Heavy Metal as a whole, and around the same time at that. BUT, there is one way Dio left his mark on the genre that Ozzy could never claim.

Take a minute and hop on Google. Image search the words “Heavy Metal.” The very first picture should be a diagram of the “Devil Horns” hand sign that these days represent everything that rocks. Ronnie Dio invented that. If you go to any hard rock concert anywhere in the world with any band, from crappy deathcore to classic rock and glam metal to radio-friendly modern metal and nu-metal, you will see this sign being made by people in the audience: 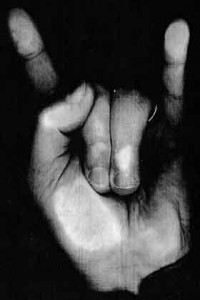 Everyone in every branch of rock music partakes in the devil horns. In that regard, the spirit of Dio and his accomplishments are present at every metal show, in every metal band, ever. 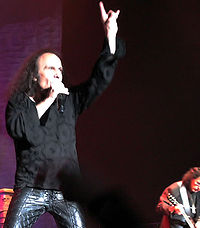 The story is as such. Dio’s grandmother was a very old-school, superstitious woman. She used to make that very same sign of horns towards her grandson to ward off evil. I’m not sure what superstition that stemmed from, but Dio just took it and ran with it, inadvertently inventing the very sign of all metal music for the rest of time. I know that bands like Coven and Sister claimed to have used it first, but it didn’t catch on for shit until the Holy Diver himself started it.

My brother once said that “Dio is too evil to die.” Unfortunately, he was wrong. Two days before my writing of this article, Dio, the man, the legend, passed away from stomach cancer at 7:45 AM the morning of May 16th, 2010. I felt like somebody had shot my dog when I found out. And while I am writing this as a tribute to one of my three undeniable musical icons (bet you can’t guess the other two), I would have happily penned it while the most powerful singer in rock were still alive. Dio deserved tribute in all walks of life, and he deserves tribute especially in his untimely death. Dio was rocking things his way even before The Beatles existed (his first claim to fame came in 1957, while the Beatles formed in 1960, when, for reference, John Lennon was only 20 years old). In that way, he essentially predates rock and roll as well as personifies it. I was fortunate enough to see him live in concert in 2007 with the other members of Black Sabbath (known now with Dio as “Heaven N Hell,” the project he was working on before he died) while they were on tour with Testament, Motorhead, and Judas Priest. I know what you’re thinking, and yes, it was one of the best shows I have ever been to.

The question that I raise now is this: what should we do to honor a man whose influence was as widespread as Alexander the Great? A man whose vision and creativity put Frank Herbert and JRR Tolkein’s to shame? I for one, think that Dio deserves a farewell at least as extravagant as Michael Jackson, and then some, once you take into consideration that Dio never penetrated an 8 year old boy’s colon. The whole public came to its knees and threw a sending off that would give Queen Elizabath envy for a fallen pederast who overdosed on painkillers and hadn’t done anything of note in twenty years, but when a TRUE charitable hero, a persistent musical icon such as Ronnie Dio leaves this mortal coil, it is a footnote in the afternoon news. What the fuck is wrong with people these days? Where are your priorities? Learn your rock history, and find out where respect is deserved, I don’t care what genre you support. Men like Dio come only once every few generations, and they leave an unmistakable path of greatness in their wake for all who can to follow. Considering the man was 5’4”, he made one hell of a tall act to follow.

📂This entry was posted in General Manliness Music
« 2012: The Longest Chase Scene Ever Filmed The Never-Ending List Of Bands That Suck, Pt. 4 »