Arnold Schwarzenegger Wishes You Would Shut The Fuck Up

Do you remember when Borat came out and everyone tried their best to impersonate him? For a few days it was actually pretty funny to do, I mean, Borat was a hilarious movie and all, and anything that reminded you of it was worth at least a few chuckles, for a little while at least.

After hearing your friends talk about gypsies in a bad Eastern-European accent for too long though, I know you can all agree with me that it kind of lost its charm. Then it became downright annoying. Then it went away.

A lot of vocal trends followed that pattern. Maddox had a great piece on the “I’m Rick James, Bitch” phenomenon of 2005, and that trend was soon followed by another Dave Chappelle-born meme, the Lil’ John impersonation. I remember in 2008, a limited but equally as annoying vocal meme was the “deathcore pig squeal.” Every two-bit wanna-be headbanger would wander around the halls of my highschool going “Breeeee-queeee-ree” for no apparent reason. At first their friends thought it was cute. Then it kind of lost its charm. Then it became downright fucking annoying. That is what vocal memes do. They get fucking annoying, so people stop doing them, and start yelling at the people who still do them to get them to stop too. It’s the way it always was and it’s the way it should be.

There is one meme, however, that seems to have transcended the boundaries of time and taste and refuses to die. It hangs around like a lost puppy, always eager to annoy the shit out of someone, and its effects have been felt across three generations. I’m talking, of course, about Arnold Schwarzenegger impersonations. 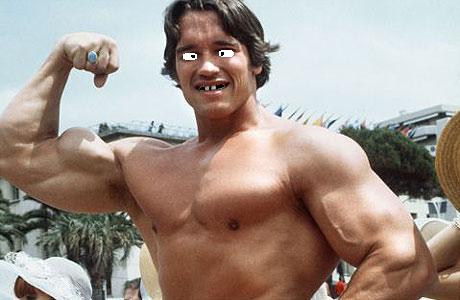 Go ahead and gasp at my sacrilege, start telling yourself that I’m out of my god damned mind, that “Ahh-nuld talk” is as timeless as the actor himself and synonymous with his fan base. Well I’m here to tell you that you are absolutely, 100%, utterly-the-fuck wrong. Like all other memes, it starts out funny. Given that Arnold’s acting career has stuck around longer than the sources for all other vocal memes combined, it is natural to have that kind of longevity, because any child growing up in the past thirty years has had exposure to it, and it’s always new to somebody. The problem is when grown-ass people do it and still expect it to be as funny is when they discovered it at age 9. Its not. Its fucking horrible.

I have a profound respect for Arnold Schwarzenegger. The man is the living embodiment of the American Dream. He came to America as a child, and as a teenager, to fill the void in his heart where his father’s love should have been, he began crushing weights (not the slang term for lifting like bros use, I mean actually picking up chunks of solid iron and crushing them, likely with some combination of his face, pecks, or penis) and realized he was really good at it. So he started taking steroids, smoking weed, and sexually harassing every piece of pussy in shouting range. He obviously was destined to become a legend . And legend he became, first with the ball-crushingly awesome documentary about the 1975 Mr. Universe competition entitled “Pumping Iron,” which stars Arnold Schwarzenegger as a douchy, drug-and-woman abusing bodybuilder who can’t stop cumming named Arnold Schwarzenegger on a quest to defeat an evil Italian Fascist named Lou Ferrigno in a who-has-a-more-authoritative-chin competition. When the film became popular, some Hollywood bigshits thought that this hulking Austrian dipshit would make a great movie star despite the fact that he barely spoke coherent English, which, of course, is the root cause of the very problem this article is here to address.

Over the years Arnold had shot, choked, bit the necks of, and blown up more people than the entire Vietnam War and made more money than a pay-per-view bestiality porn star in a zoo full of voyeuristic perverts. Not satisfied for literally owning the entire action genre for a decade and being the centerpiece for what might be the manliest movie ever, being Predator, he broke into comedy in the early 90s and owned the fuck out of that too. He married a Kennedy. When he decided that Hollywood’s colon could no longer stand the almighty thrust of his thunderous movie-dick, he showed mercy and retired from acting…

…To get elected as the fucking Governor of California. Twice. During which, or course, he laid waste to his housekeeper’s orifices on a weekly basis and almost entirely got away with it. You see, his housekeeper may have been ugly as sin, but that actually worked to his advantage. If someone accused him of banging Michelle Pfeiffer or Sharon Stone, well he is Arnold fucking Schwarzenegger, king of the world and notorious pervert, of course he would, cuz he could. But you take one look at his haggard-ass maid and think to yourself “If he was going to cheat on a Kennedy, he would do it with someone a lot better than that.” That plausible deniability is what covered his ass for over fifteen years, and I must admit, it’s fucking brilliant. If Tiger Woods would have taken advice from Arnold Schwarzenegger, he would still be on the front of the Wheaties box.

Anyway, political run over and marriage in shambles, he could have keeled over and disappeared into the blue. Instead, he redoubled his limitless testosterone and got straight back into making awesome action movies. Seriously, watch The Last Stand, it views like a punch in the nuts.

In short, this man beat life. Think about it; a nothing immigrant for some third world Soviet shithole to Mr. Universe, to one of the most successful actors ever, to Governor of the most populous state in the country. He wins. End of story. But all of this is building to a point, I love Arnold Schwarzenegger. Yet as I’ve grown older, you know, like after hitting puberty and shit, I find people who needlessly impersonate him more and more annoying, and this is coming from a guy who saw Austrian Death Machine live twice.

The standard is as follows: sometimes it is appropriate to make references. It can be funny when done sparingly and at relevant moments. But to do it for the sake of doing it confirms your eligibility as a raging shitcock. Further, and this rule applies specifically to the Arnold impersonations, if you have to do it, actually say one of his lines, don’t just stand there grunting like a tractor getting cornholed. Shouting out a muffled “BHAAHRAG,” “NDAAAAAHW,” or “NAUUUUUD” for no reason other than to announce your virginity makes me want to punch you in the throat. The other day my roommate (you know who you are) wandered around the house all fucking evening shouting in his worst Arnold Schwarzenegger impersonation for no reason other than he came home from work feeling like an asshole. He wouldn’t shut up, so I got annoyed and pissed in his mouthwash. If whatever he was babbling about happened to be the subject matter du jour, or even relevant to some kind of string of jokes being made at the time, it would have been forgivable, but it wasn’t. It was just a never-ending stream of retarded pop culture spewing out of his dirty whore mouth. Timing is the difference between good comedy and being Adam Corolla. Example: when you play the Hospital level in Left 4 Dead, and the rescue chopper lands on the roof and a pile of pissed off zombies stand in your way, it can be funny to shout into your mic “GET TO THA CHOPPAH!” But when you are running to your car from the grocery store, it really loses about 150% of its comic value. You should only ever shout “I’LL BE BAHK!” when leaving a room if you have killed the majority of the people in the room. Otherwise, you just suck. If you randomly, without provocation ask me who my daddy is and what he does, I would respond by saying that he doesn’t sire children with the brain capacity of a punctured colonoscopy bag. So for the love of God, can you please stop with the collective vocal seizuring and figure out how to not suck at everything all the time? You losers should be more like me; because I’m so awesome I once took off a bra with my mouth and caught it with my dick. God damn I love myself.