A Tribute To Tim Burton’s Endless Parade Of Uninspired Bullshit

UPDATE MARCH 2015: According to The Hollywood Reporter, the next victim of Tim Burton’s butchering spree of beloved childhood films is going to be a live action Dumbo. Rumors have it that it will have nothing to do with a elephant, and will simply be an autobiographical film about how much of an idiot Tim is.

It’s like he had such a terrible childhood that he made his mission in life desecrating all the things that made other people’s childhood better than his, thereby trying to retroactively make everyone as miserable as him by what is the artistic equivalent of revealing that the slinky is really a 3rd century Bohemian sex toy. Earlier this year, someone started an internet hoax that Tim Burton was going to remake Mary Poppins, and for a while people believed it, that’s because everyone knows deep down that Tim Burton’s sole purpose in life is to take classic childhood favorites and take a steaming shit all over the. The art direction in Tim Burton’s movies are almost as cliched, shoddy, and disappointing as Tim Burton himself. I mean, look at this guy. He’s one bad tattoo away from being Charles Manson and just as good at influencing dimwits. He even fucking looks like Charles Manson. It’s no coincidence that this is a believable hoax because as I mentioned, Tim Burton loves to utterly fuck up classic movies. Let’s take a look at his some of his filmography as proof of this: 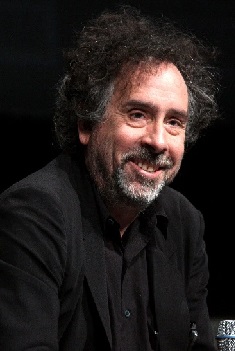 Batman– Legendarily terrible, if I need to explain why, you grew up in Somalia. Also, nipple suit.

Sleepy Hollow – The fact that he took the iconic 1920’s horror story and turned it into a vague reference to 21st century metrosexuality suggests what many of his later ideas prove: that he doesn’t give a fuck about source material.

Charlie and the Chocolate Factory – How do you turn a movie that is whimsical (whatever the fuck that means) and only vaguely pedophilic into a movie that is nothing but pedophilic? Add Tim Burton to the mix! Another childhood classic ruined for the sake of Hot Topic stock options.

Alice in Wonderland – Turn Alice into Joan of Arc, the Queen of Hearts into a midget fuck-buddy, and one of the greatest achievements of American Literature into a worldwide embarrassment.

Dark Shadows – Based on a sitcom that no one remembers or cared about. Now it’s a movie that everyone tries to forget about.

Here is a list of Tim Burton movies that don’t suck: 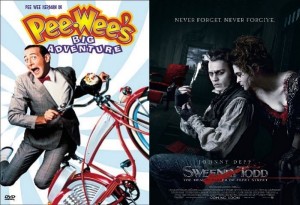 When your best movie is about a sex offender in a bow tie hitchhiking across America, it should be a sure sign to throw in the towel. Sweeny Todd is on the list because it is essentially “A Modest Proposal: The Musical,” and let’s face it, that sounds way cooler than the plot to any other musical you’ve seen.

Whilst not fitting into the “things that suck about Tim Burton” category, it’s also telling that Pee Wee’s Big Adventure was based on an already-existing show and characters, that “Ed Wood” was a biography which you can’t really screw up, “Sweeney Todd “had already been a musical for thirty years, and “Frankenweenie” was a remake of a short film he did in college. That leaves only six films he directed (out of sixteen) that he came up with himself, and most of them were in his earlier days as a director. You’d have to have Down’s syndrome to realize that Burton ran out of ideas a long time ago, and is instead squeaking by on his bullshit “cult appeal” and rehashed ideas that he can’t take credit for. Now I get it, a lot of directors are recycling the same dead-horse ideas these days, but hell, at least the 23rd James Bond movie was actually good. At least Fast 6 was actually good. At least The Avengers was good. Burton has no such claim because his entire movie legacy equates to appeasing goth losers in order to pay his mortgage.

One important thing to keep in mind is that Sweeney Todd excelled as a movie not because of the main characters, but despite them. Johnny Depp’s performances in Tim Burton movies are “eh” at best, he’s given the weird roles because most other actors would have called bullshit on their directors years ago for some of the dumb nonsense they’d have been put through, and let’s face it, nothing compares to “Fear and Loathing in Las Vegas” anyway. Helena Bonham Carter is an ugly bitch and a shitty actress. And did I mention she’s ugly? If it wasn’t for Helena proving that banging your director gets you more movie roles, Kristen Stewart wouldn’t exist. Helena Bonham Carter is responsible for Kristen Stewart, and that’s more unforgivable than shitting in someone’s oatmeal. People will point out that she did a good job in Fight Club, but what they fail to realize is that nothing was good about Fight Club. Fight Club was the worst non-Tim Burton movie to come out in the 1990s since Judge Dredd.

Curiously enough, Helena’s great-grandfather was the Prime Minister of England during the First World War, which sounds cool until you find out that he also resigned midway through it for being a shitty wartime leader, which was a large factor in the eventual downfall of his entire political party. Good job, buddy. Plenty of directors have a favored pool of actors and actresses they like to pull from, but never in history has it been as high-handed and obvious as Burton’s incessant need to shove the combined Depp/Carter up moviegoer’s asses for a few hours a year.

Another near-miss travesty that Burton tried to gouge our eyes out with was the ill-fated “Superman Lives” project, which put Nicholas Cage in a rubber suit that looked more like a broken thermometer or that fat guy from The Running Man than the recognizable visage of the Man of Steel. You may as well try rewriting American history while on mushrooms. 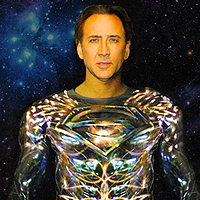 Burton knows exactly what his audience is and he takes no tact in intransigently pandering to them in order to keep himself relevant. The only way to make his targeting more obvious is to have My Chemical Romance do the musical scores for his future movies once Danny Elfman finally dies of shame.

📂This entry was posted in General Movies Pop Culture Things That Suck
« The Winter Soldier Is The Film Steve Rogers Deserves It Can’t Get Any Worse: How “Turn Down For What” Might Benefit The Music Industry »