The Winter Soldier Is The Film Steve Rogers Deserves

If you’ve ever wondered what it’s like to get kicked in the face by a 22 foot tall TV screen, look no further than the new Captain America sequel. Just as much at home with the fist-flying action resurgence of recent years as with the best of the comic book films, I can’t think of a single red-blooded American that wouldn’t enjoy this movie. Fair warning though: the raw ball-busting fury of The Winter Soldier may not be suitable for pregnant women, women who may become pregnant, or limp-wristed latte drinkers.

The creative minds behind the Marvel Cinematic Universe owed Captain America, and, one could argue, the Cap himself this bad ass of a movie. While the first film was great, The Captain was overwhelmingly left out of the largest film in the franchise: The Avengers. When you really, deeply, consider the facts, Avengers was in a lot of ways disappointing. Before you get your nerdshorts twisted and sulk in your basement, think about it, what did the Cap actually do in The Avengers? Not a God damned thing, that’s what. Let’s take it play by play to prove that as always, I’m right:

Cap’s first meaningful appearance in The Avengers is to intercept Loki in Stutgartt, but all he really does is sit there and bullshit with him until Iron Man shows up and saves the day. The next major scene features him breaking up a fight between Iron Man and Thor over custody of Loki. After that, on the S.H.I.E.L.D. Helicarrier, Rogers helps Iron Man reactivate the broken engine by doing what? Shooting at a guy for three minutes (a guy he doesn’t even hit) and flipping a lever after Iron Man speeds up the engine turbine. Coulson dies, and his Captain America trading cards inspire Cap to put his foot in Iron Man’s ass to get him to want to play along and help save the day. Then, even though Barton, Black Widow, and Cap all board a S.H.I.E.L.D. jet and fly off to New York with Iron Man, Iron Man still somehow gets there ten minutes earlier than everyone else, talks some shit to Loki, who needs the power source from Stark Tower to open the rift in space and kicks off the invasion battle. Now, here is a big chance for Cap to lay an absolute smack down on robot aliens trying to take over his home turf, but that didn’t happen because it was apparently everyone else’s job to do that while he ran around on the ground fist fighting a handful of grunts.

Think about the final battle, every single other Avenger had a more integral role in the fight than Captain America did. It’s obvious that Iron Man and Thor’s ability to fly and Hulk’s ability to jump really far make them more viable combatants in a city-wide battle, but even the two “only human” members of the Avengers find a way to get more in the thick of the shit than Steve Rogers does. While Iron Man, Hulk, and Thor each got to kill one of those flying leviathan things, Black Widow hitchhikes a glider and eventually seals the portal in the sky, Hawkeye climbs rooftops, blows up Loki, and grappling hooks flying guns. Captain saves a few people in an office building and bosses a couple fat cops around. In the climactic final moments, it is none other than Iron Man who flies the nuke into the portal and single-handedly murders an entire race of aliens.

Did you see the fucking pattern there? Not only was every single major plot point in the entire film entirely about Iron Man, but he was also the major contributor to every single action sequence as well. Thor was second most important, and Captain America was dead last. He never had a chance to do ANYTHING cool at ANY POINT in the movie. It would have only taken a few strokes of a pen to write him out of the God damn film entirely. They may as well have marketed it as Iron Man 3. 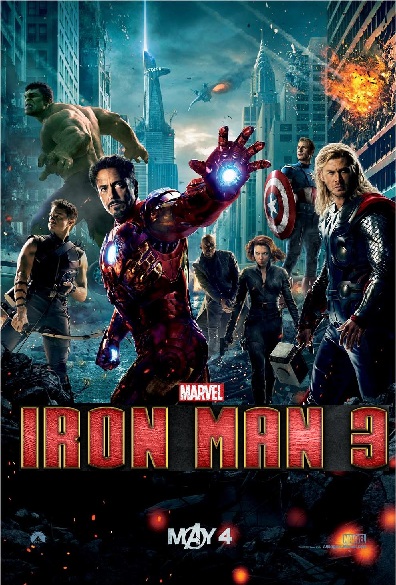 Anyone who saw “Captain America: The First Avenger,” read a Avengers comic book, or even played Marvel Vs. Capcom knows that The Captain is better than that and deserves better than that. Because the first movie always requires an origin story, his chances to really whoop ass were restricted in “First Avenger.” It was to my deep, deep, enjoyment that the directors realized they had no excuse to stiff the man his action sequences in the second. Hell, the movie’s opening scene reestablishes that Steve Rogers is a beast as it shows him run literal circles around the guy who would become Falcon. After that, the scene where he retakes the S.H.I.E.L.D. barge from French pirates (it’s its own punch line) and beats a 3-time UFC Welterweight Champion up with his bare hands. After that it’s off to S.H.I.E.L.D. HQ to kick some more people’s asses (including the person who will become Crossbones), matches wits with a sentient Nazi computer before dodging a Hellfire missile, watches Nick Fury die, makes fun of faggoty Apple fanboys (redundant, I know), get to first base with Scarlet Johansson, fist cuffs the Winter Soldier a few times, and take out a fighter jet with his shield. One of my favorite parts however, was the post-credit sequence introducing, wait for it… Quicksilver and Scarlet Witch. Quicksilver and Scarlet fucking Witch. X Men mutants in the Marvel Cinematic Universe, holy shit, mother of God, I cannot fucking wait. Does this mean Marvel is finally succeeding in getting the rights to X Men back from Sony?

Also, did I mention Steve Rogers befriends a black dude with wings?

Speaking of Falcon, one of my favorite things about the movie is that there isn’t a single main or even secondary character that doesn’t beat some serious ass at some point in the film. Black Widow, Falcon, Batroc, Crossbones, Nick Fury, Moira Hill, even Captain America’s neighbor gets in on the action, and every single one of them punches, stomps, shoots, or causes to explode some other asshole at some point in the movie. And don’t even get me started on the titular Winter Soldier. What a boss. The last time I saw a villain kick so much major ass in his own movie was Ivan Drago in Rocky 4. Now imagine the final fight between Rocky and Drago, except right before the bell Drago punches the entire audience to death while wearing goggles. Also, his arm is robotic and he’s 90 years old. That’s how much ass the Winter Soldier whoops in his movie.

The attention to detail and actually smart-and-accurate undertones of the movie make it extremely enjoyable as well. The major arc, on the surface, revolves around a S.H.I.E.L.D. surveillance weapon with the power to kill millions of “potential threats to freedom” falling into the wrong hands, but the undertones fit rather well with our current events without coming off like a shameless shill that Hollywood is so good at stuffing into our eyes. It addresses the struggle between freedom and security, calling to mind as Ben Franklin stated (in paraphrase) that those who give up liberty for security will find themselves with neither. The “kill algorithm” controlling the weapon was the result of a massive, multi-decade data mining operation that snooped and weighed every aspect of a person’s life to judge whether they were fit to live in the new world order or if they needed to be killed in the process is only a slight deviation of what the NSA and IRS have been doing to American citizens for years. In so many obvious ways, the Zola computer is the NSA. The parallels are undeniable. Did I mention that Zola is also a Nazi bent on world domination whose plan is to introduce decades of conflict to make war-weary people more willing to consentually give up their freedoms for the “safety” of a one-world oligarchy? Yeah. Sounds a little familiar. Early in the film, Cap has a hard time swallowing how much the meaning of “protecting our freedom” has changed since his day.

And if all of that is a little too Ron Paul for you, some other non-political finer details may interest you as well. For example, if you are a gun person, all of the good guys AND all of the bad guys use P Mags in their rifles. Nice touch. The narrator for the Captain America museum exhibit is none other than Gary Sinise, one of the most pro-American actors this side of John Wayne, and who better to have verbal custody of the exhibit of America’s greatest superhero? Lastly, just for a brilliant touch of pop-culture humor, the quote on Nick Fury’s tombstone at the end is “The path of the righteous man…” If you don’t get it, I’ll spell it out for you. Fury is played by Samuel Jackson, who grew his career leaps and bounds in the 90s by starring in the massively-overrated “Pulp Fiction,” where his character’s favorite quote was a bastardized piece of the Bible that began with that line. If you don’t get the reference by now, you won’t.

Even the way the movie ends is calculated because it ends the exact same way as the first one: with Captain America falling into a body of water and waking up in a hospital bed. I don’t know if that’s symbolic or coincidental, but it’s still kinda cool.

One final piece of wet-dream for anyone who actually gives a shit about Marvel Comics: I feel like I regularly noticed small pieces of story laying the foundation for a film adaptation of Civil War. Growing distrust between superheroes and the US Government, Captain’s duty toward preservation of traditional American values, and the introduction of Crossbones, the villain responsible for killing Cap at the end of the arc point subtly toward that conclusion. Think about it. Civil War was the most major story arc in the comic book industry for the past twenty years; it would be a perfect way to end the run of the current Marvel Cinematic Universe. If done right, Civil War may be the greatest hero movie ever, and it will be worth the 5+ years it may take to get there. And if Marvel can wrestle control of X Men back from Fox or Sony or whoever, could we eventually have an Avengers Vs X Men movie as well?

Anyway, now that I’ve ruined the entire plot and twist of the movie for you, it’s time you see for yourself. See it twice. Bring a date. She’ll be so impressed by the enormous boner you’ll pop watching this amazing action movie/ geeky wet dream that she’ll pretty much have to put it in her mouth. You can thank me later.

Oh, and I forgot to mention earlier, this review contains spoilers. Fuck you.