I’d like to take this opportunity to introduce my new series, The Never-ending List of Bands That Suck, based on the premise that bad taste has no bounds. If you need proof, look around you. Taking into account the past, present and uncertain future of music, it is plain to see that it is a permanent and immortal form of human expression. Building on the idea that music is infinite, it is also reasonable to conclude that shitty music is never going away. Though the thought of chronicling and recording every single talentless and otherwise worthless musical endeavor would be a struggle in vein, I feel it only proper for me to list, include, and antagonize some of the most glaring examples of failure in music history to date. That being said, I feel it wise to kick off my lifelong, endless journey through the skid marks of music with one of the worst bands ever, and go from there.

1. Slipknot
Never in my life have I been graced with such deep, immersive, creative, intuitive, and wholly heartfelt lyrics as I have in the few unfortunate times I have listened to Slipknot. A sterling example of the shitfest sellout nature of this band is relevant in the lyrics: “If you are 555, then I’m 666!” The anti-christian teen rebellion screams from the incessant chanting of these words. Okay, 666 represents Satan, I get that. But where the fuck does the 555 come in? A fictional phone number? What the fuck does 555 represent? Its a senseless and brainless way to appeal to the juvenile trend of hating religion, because it’s the rebellious thing to do. I’m not even a religious person, and I don’t get why defaulting to making fun of Christians automatically makes you cool. Slipknot even further reduces the IQ of its fans with brilliant song titles, such as People=Shit, an equally rebellious and in-your-face mantra for the masses of disillusioned youth who are led to believe that a group of 9 cocksuckers in costumes aren’t driven by greed and aren’t capitalizing on your stupid motes of adolescent rebelliousness that are even further fueled by Hot Topic force-feeding you preprocessed “rebellion” so you’ll shell out twenty bucks for a Slipknot t-shirt just to show off how much you hate the establishment that you are unknowingly supporting by taking in the garbage in the first place. The fact that Slipknot is getting filthy fucking rich by selling you exactly what you want is proven with this: You remember way back in the day, when Burger King launched another sorry excuse for food in the form of chicken fries? The product launch was accompanied by a band called Coq Roq who made music videos about how too chicken fries were supposed to be. Sure, it was a terrible marketing ploy, but we can all take solace in the fact that the commercials got pulled after a few weeks because Burger King got sued by Slipknot, who claimed that Coq Roq, in their costumes, was capitalizing on THEIR image to sell product. A band in costumes does not automatically make them an homage to Slipknot you pompous fucks. If this was so true, where were bands like KISS, Mushroomhead, GWAR, Green Jelly, Lordi, and Mudvayne? Shouldn’t they have sued too?

And for the fucking love of God, there are nine fucking people in that band. One of the guys’s entire role in this shit-fest is to bang on a fucking trash can. Unfortunately, Oscar the Grouch was given no credit in their liner notes. They also have a turntable DJ, for a nice little twist on Linkin Park, which is a fair comparison considering they both suck. Corey Taylor, the vocalist, is just as much as a dipshit as the rest of them not only for writing this nonsense, but for ditching Stonesour to do so. I can’t decide whether I hate this guy or not, because each time he does something cringe-worthy in Slipknot, he does something cool with Stonesour. Every time I think I have made up my mind on this guy, he completely changes what he does and I’m left trying to figure out how much he sucks all over again.

For 9 people in a band, on stage at the same time, they have a pretty fucking boring live show, too. I saw a band with two people have more of a presence than all nine of these mask-wearing fat fucks combined. Speaking of masks, isn’t it hilarious how Slipknot blatantly ripped off Mushroomhead? Mushroomhead formed before Shitknot did, they were a band of 8 who wore masks. Two years later, Slipknot comes out, ripping off everything Mushroomhead had done, but instead of being a big band with masks that kicks ass, they changed it to be a bigger band with masks that suck ass. Slipknot fans will of course deny this in a similar manner to Metallica fans denying that Lulu was the final nail in the coffin of a band that hasn’t been good since before I was born, but deep in their rebellious little hearts, they know it to be true. Also, while Mushroomhead’s masks are cool, Slipknot’s are fucking 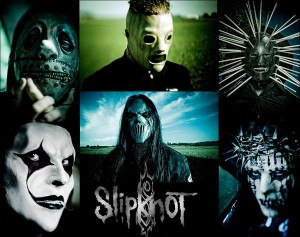 absurd. One of them looks like a gimp mask with roofing nails stuck through it, an obviously rip off of Hellraiser. The one named Craig. Mick here looks like the Terminator with a mullet, Sid just took a Darth Vader mask and cut circles out of the eyes and mouth, Chris is the product of a love affair between Jason Voorhees and Pinocchio. James is Guy Fawkes’ evil twin, and Joey, in the lower photo has a crown of thorns, like Jesus, and I feel no further comment is needed on that. Whoever the fuck on the bottom-left of the below picture tried to look like King Diamond, and last and deservedly least, Shawn somehow wandered into the band shoot from an ICP convention, which may just be the the only band worse than Slipknot. I don’t know what’s more bad ass about this snapshot, doughboy in the center with the horrible bat wing tattoo, the kid sucking a pretend dick next to him, or the sea of do-da haircuts behind them (“Mommy won’t let me grow out my hair”). Or maybe boy-toy to the left wearing eyeliner? Better watch out metal heads, there’s a new presence in town. This band is partially responsible for the dumbling down, pussifying, and overall shitty state of metal these days. I was raised on certain moral values, among them being Slayer, Pantera, and Sepultura, and this carnival of suck is pissing all over every remaining outlet of good taste the aforementioned bands have carved out for their genre. I could write another six fucking pages about how fucking stupid this fucking band is, but I’m getting so fucking mad I can’t even fucking think straight anymore. Fuck.

The Power of Thy Sword Hath Failed The Power Of Thy Garb. Faggots.

3. Paramore
A Generation Y product of the feminist movement, Paramore’s 20 Year old singer Hayley Williams has only one thing to say: I’m jailbait, you think I’m hot, but I am/am not interested in you. Seriously, every god damned Paramore song is about the exact same thing, how some loser is madly in love with their bitchy singer, and how she reacts to it. Keeping in mind she started this band when she was only sixteen, it really makes you wonder exactly how huge of a slut our Pumpkin-haired protagonist is. Their meager reputation is further soiled by the fact that they wrote a song for the Twilight soundtrack. Man I hate Twilight.

4. Fall Out Boy/Panic! At The Disco
You may wonder why I lump these two into the same category. It’s quite simple really, seeing as they are the same fucking band. One thing that pisses me off about this band(s) the most is that a group of emo make-up wearing skidmarks such as themselves keep trying to portray themselves as “hardcore” or “badass.” This is evident in their songs titled: “I Write Sins, Not Tragedies” or “This Ain’t A Scene, Its Am Arms Race.” An arms race you say? So you’re implying that there is a literal gang of pussy emo kids out there imploring the “Big Stick Diplomacy” method with other rival cartels/bands? Give me a fucking break, you are a fat whiny bitch in a sweater vest. No one thinks you are hard, cool, or evil. I mean really, when you look like this, it’s hard to be threatening, unless of course you are threatening to anally rape me: An arms race? Oh no, a guy with rosy cheeks and make up is arming himself! For what? The inevitable lynch mob that will bang down his door to fag drag him? You don’t impress me, so shut the fuck up, screwhead, before you become single-handedly responsible for the downfall of good taste. And what the fuck is it with all of your stupid song titles? They are either a paragraph long or make no sense, or both. Sterling examples of this are as follows:

1. “Our Lawyer Made Us Change the Name of This Song So We Wouldn’t Get Sued”
2. “I’ve Got a Dark Alley and a Bad Idea That Says You Should Shut Your Mouth (Summer Song)”
[Again, stop trying to be bad ass, it doesn’t work]
3. “I Slept With Someone in Fall Out Boy and All I Got Was This Stupid Song Written About Me”
[Because they need to reassure you that they can pull tail, quite frankly, because you know you doubted it yourself]
4. “Thnks fr th Mmrs”
[No vowels? HxC!]
5. “Fame < Infamy”
[Too bad you’ll achieve neither]
6. “You’re Crashing, but You’re No Wave”
7. “20 Dollar Nose Bleed”
[Vague cocaine reference?]
8. “Disloyal Order of Water Buffaloes”
9. “I Don’t Care”
[Rebelliousness 101]
10. “The Only Difference Between Martyrdom and Suicide Is Press Coverage”
11. “Nails for Breakfast, Tacks for Snacks”
12. “Lying Is the Most Fun a Girl Can Have Without Taking Her Clothes Off”
13. “There’s a Good Reason These Tables Are Numbered Honey, You Just Haven’t Thought of It Yet”
[WTF?]
14. “Nine in the Afternoon”

There you have it, fourteen reasons to hate Fall Out Boy/Panic! At The Disco. I’m going to start a band and name one of my songs that, so I too, can have obnoxiously long song titles.

5. The Devil Wears Prada
Any band named after a movie starring Merryl Streep is destined to fail.

How very hardcore, a movie about fashion.

📂This entry was posted in General Music Pop Culture Things That Suck
« Now Matter How You Look At It, Football Is Gay The Man Awards: Most Repetitive Actor »