There are only three times in my life I came more than five times in one sitting. The first one was when I took your mom out last month, the second time doesn’t exist, and the third time was watching Zombieland. 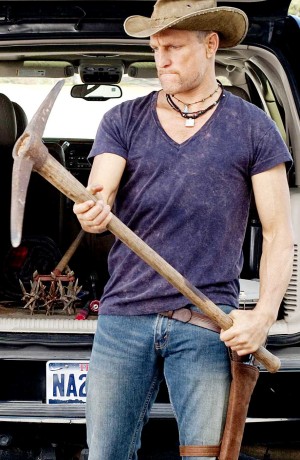 Zombieland is a masterpiece, plain and simple. It takes everything you could ever want in life, and combines it into 80 minutes of pure mangasm. Seriously, this movie has it all: zombies, gore, a Benelli M4 shotgun, fat jokes, and Bill Murray, not to mention a pretty hot (albeit absolute bitch of a) female lead. Emma Stone isn’t too bad looking either. To avoid confusion, I’ve labeled the female stars for those who haven’t seen it yet:

The movie begins possibly one of the best ways it could: with a metal song playing full blast while images of people being eaten flashes across the screen. You are then introduced to the film’s loner, college student and typical wanker protagonist Columbus, who breaks down the basic rules of staying alive in a post-zombie-apocalyptic world. The first rule he explains is the most important: cardio. Translation: don’t be fat. Fat people 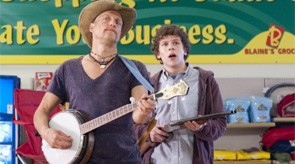 can’t run fast, and as a direct result, were the first people to die when the outbreak occurred. This concept is as awesome as it is hilarious for reasons that if you don’t understand, you have no business seeing this movie in the first place. After crashing his car, he strikes out on foot, only for a bulldozer/Escalade driving Woody Harrelson to bad ass all over his face and give him a ride. This is where the movie starts to turn into the best movie of 2009. To put it simply: “Tallahassee” as he is called, is a zombie mutilating, whiskey swilling hardass who is making a killing in the business of killing. He lives for two things and two things only: massacring the undead in the most creative and funniest ways possible, and to find and eat the last twinkie on earth.
Tallahassee proves his manhood by absolutely wrecking three zombies in a grocery store with a banjo, a baseball bat, and a pair of gardening shears. 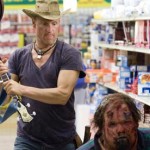 From there, he runs into Wichita and Little Rock (so named after the towns to which they are headed), and decides to blast Little Rock in the face with his shotgun for not making with the pole. Wichita stops him and steals his gun and car in the process. Well Tallahassee is such a man that he isn’t going to stand getting fucked over by some dumb cunt, unless he was literally getting fucked by her, so he and Columbus set out for revenge, because revenge is the manly thing to do.

This alone makes the movie the shit because I can’t count the amount of times I’ve gotten pissed off at a zombie movie for having a total pussy go and fuck everything up for everyone else who’s got the balls enough to survive. In every zombie movie ever, someone, be it male or female (usually the latter, it fits more into their gender role) is a whiny little bitch who is afraid of their own shadow and ends up getting themselves killed and royally fucking everyone else in the process. Zombieland takes into account that all of those losers have already been brutally torn to shreds like they deserve, and that only the most bad ass people are still around inserting their foot into other people’s asses. Therefore, the only story left to tell is a story of these people with absolute stones going around taking names. Only their not taking names, they’re shooting people in the face, which is way cooler.

The movie climaxes (and so did I) at an amusement park, which I never would have though until now would be a cool place for a shootout, unless a bunch of spoiled kids and people in mouse costumes were caught in the crossfire while white doves flew everywhere. Unfortunately this is not the case, so instead of children being shot (the only reason The Happening was a good movie), all that’s left to shoot are the living dead. Of course, Tallahassee kills about 98% of them himself in one of the biggest displays of testosterone I’ve ever beheld outside of my bathroom mirror. The movie ends, and everyone walks away with a little more hair on their chest.

Thus ends the greatest sex of my life, and one of the best movies I’ve ever seen. It is so good, I’m actually going to pay full price to buy it the day it comes out, and I never pay for anything. It is so good; I don’t feel ashamed of myself for mentioning it in the same breath as movies like O Brother, Where Art Thou, Se7en, and Fear and Loathing in Las Vegas. It is so good, that if you don’t go and see it, I’ll intentionally give you malaria.