Extremely Overrated Ways To Have Sex

Because sometimes, the means do matter more than the ends. 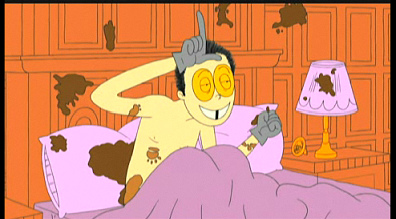 I went to the Fetish Ball once to see Celldweller, and was I surprised that almost everyone there was fat as fuck? Hell no I wasn’t, S and M is for fat losers.

What’s the appeal in tying someone up when you fuck? They should be free to use their hands to do important things like playing with my nuts or changing the channel on TV. Fucking someone who is immobilized is like inflicting dead-fish syndrome on yourself. If some chick ever threatened to tase me during sex, I would beat the shit out of her, and I probably wouldn’t even stop thrusting while doing it. A little bit of bedtime violence is one thing, but when chicks talk about bringing knives and other things in bed with them to be sexy, all it makes me want to do is laugh at your shitty childhood. Don’t get me wrong, I do enjoy stuff like choking chicks when I bang, but I don’t do it for arousal so much as it’s something I do whether I’m having sex or not… It’s just hilarious to do whenever.

Role play – LARPing while naked doesn’t make it any more appealing, it arguably makes it less. You can tell a lot about someone by how they role play in bed. If she wants to pretend she’s fucking some world leader, she’s a gold digging bitch. If a guy asks his girlfriend to pretend that she doesn’t know him that means he’s never had any strange. In most cases, it just reveals how much your life sucks. Take rape fantasies for example. The appeal is in the danger, and there’s no danger in a fantasy. If you want to experience rape, there are more realistic ways to meet that demand. It’s probably not hard to get raped in this day and age.

Handjobs – anyone over the age of 12 should be furious if they receive a hand job from a girl instead of trim. As part of foreplay, they’re fine, but as a means to an end it is insulting to me as a human being. I’ve been jerking myself off for over ten years, what the fuck makes you think you can do it better? If you can’t fuck for some reason, like shark week, fine, the least you can do is blow me for my troubles. Hand jobs are for 5th graders. Even worse than that is what I call an Ol’ Rooty. An Ol’ Rooty is like a handjob from outside the pants, when the girl (or whatever) is stroking you without even touching your actual shaft. The reason its called that is because getting such a simple sexual act reminds you of your childhood, effectively bringing you back to your roots. That and because when you sprout one inside your pants, it looks like a root breaking out of the ground. The first time I got one it blew my mind (and something else) but that was because I was a little fucking kid and had never been touched by a girl before. I simply didn’t know any better. Considering most people are sexually active by their twenties, giving an Ol’ Rooty to someone unless it’s the first step to foreplay and sex is just insulting.

Shower sex – Another thing that so many people find appealing for no good reason. Shower sex is presented as one of the most erotic things you can do, but if you’ve ever actually done it, chances are you hate the ever living shit out of it. There’s no appeal in almost drowning when you bang. Most showers and bathtubs have a hard enough time fitting two people in them at all, let alone comfortably, and if you choose to stand, you run the risk of slipping and smashing your face in, which would definitely be a boner killer. No matter how you are positioned, water is bound to get somewhere you don’t want it. In your eyes, in your mouth, in between your legs and the girl’s ass cheeks so whenever you push forward it makes it sound like she’s ripping ass. There’s just no winning with this one. I can say for a fact that it is easier to bang inside the trunk of a car. At least there’s no water in there.

“Wake up its time to have sex” sex – if you don’t get laid regularly I can understand putting up with whatever to get some pussy. But once you’ve been in a stable relationship a while and that “do anything to get laid” urge quells under a barrage of constant ass, the whole waking me up in the middle of the night for physical labor, however enjoyable the outcome, gets kind of old. If I wanted to have sex, I wouldn’t have gone to bed. Matter of fact, there’s only one reason why I would have gone to bed: to sleep, which you are interrupting.

Gang bangs and trains – Great to watch on TV. Hilarious as they are though, unless you are at the front of the line, you’ll probably die of AIDS. Unless of course you are Vinnie Paul, the drummer for Pantera, who lost his virginity being 6th in line for a gang bang. To this very day, scholars debate whether Vinnie is the way he is because he was sixth in line, or if he was sixth in line because of the way he is.

Sex on the beach – Like shower sex, highly touted and highly overrated. Sand gets EVERYWHERE, and sticks to whatever is wet… You get the idea. Also, there’s rarely a place on an open beach that lends much if any privacy, and if you get caught, you’ll probably have to stop, and stopping is the exact opposite of what you should be doing.

Falling-over-drunk sex – The infuriating irony of whiskey is that it makes you want to fuck more than anything in the world, but renders you utterly incapable of it.

Unprotected sex – Hear me out on this one: Unprotected sex feels a million times better than protected sex. But what doesn’t feel good is waking up at 3 in the morning on a workday to a screaming baby who wants you to clean out the gigantic puddle of shit from inside its underwear, unaware that their dumbfuck father could have avoided 18 years of child support, a lawyer, a long and taxing custody battle that exposes every sordid bit of your personal life, and alimony money that goes to buy cool shit for the guy your ex wife is currently fucking that you could have afforded for yourself if you had only spent three bucks at Walmart on a box of condoms a year and a half ago, sparing yourself the knowledge and burden of your child’s future fate being the eventual maturation of your shithead growing into a shithead teenager who had no shithead adult supervision growing up and having you to blame for why daddy’s little girl is a stripper and his good ‘ol son is in prison getting ass raped by MS 13 gang members for selling weed on campus at school, only to later ignore you entirely when you get old and incapable and abandon you at some old people’s home to die a slow, long, lonely death while they make the same dumb shit mistakes you did by not wrapping up before fucking that waitress they met last week, thus further perpetuating the cycle of custody battles, alimony, daddy issues, and food stamps that is now inherently ingrained into their DNA all because of you, the most irresponsible person in the world, invented poverty by being a stupid piece of shit who never used a condom “because it felt better.” Fuck you.

📂This entry was posted in General Things That Suck
« Dismantling Hollywood.com The Winter Soldier Is The Film Steve Rogers Deserves »