The Next Thing Tumblr Feminists Will Protest. *Possible Trigger Warnings*

I don’t know about you, but I hate men. Gloria Steinem was right about everything, and Goddess bless her and her mission to spread Feminism to the savage Patriarchal culture that makes up America. Thanks to the Social Justice hub that is Tumblr, wimyn all over the world can join forces to fight the daily misogyny that so many people exert over each other. With the recent New York subway protests of “Manspreading” and the righteous Wimyn’s Rights battle that is #gamergate, the Feminist movement has become emboldened. This is just the start, as the whitest of White Knights, I suggest we lead the charge into the lion’s den and grab the Patriarchy by the stones. These are the next things that responsible Feminists should band together to slactivize against!

Whenever somebody “pwns” (a Patriarchal slang term of dominance) someone else in Halo, it is customary to alternately crouch and stand over their corpse to symbolize that you are “tea bagging” them, which is a gentleman’s expression for rubbing your nuts all over them. Since wimyn don’t have nuts, teabagging is an exclusionary practice and needs to be banned since it discriminates against wimyn for the crime of being born without Patriarchy-empowering testicles.

Led Zepplin said “In the day of my youth, I was told what it means to be a man.” For those uneducated apes amongst you, the Patriarchy dictates that “being a man” means brutalizing, objectifying, and subjugating wimyn.

Sugarloaf said “Green eyed lady, windswept lady.” This may at first seem like an ode to a particular lover of a band member, but in reality it is a microaggression of body shaming against wimyn who were not born with a certain color eyes or an affirmation for those who wear painful and inconvenient contacts to change their eye color all at the whims of a man.

Queen said “Fat-bottom girls, you make the rockin’ world go round.” This discriminates against wimyn with eating disorders, as if the oppressive hand of the Patriarchy didn’t suffocate them enough and cause their eating disorders in the first place. Some people may say it is contradictory that Feminists can rally against fat-shaming and skinny-shaming at the same time, but those people have obviously never read The Bell Jar so they probably beat their wives.

Motley Crue said “Girls, girls, girls. Long legs and burgundy lips.” They also said a lot of other unflattering things about wimyn that I can’t even muster up the strength to type because they are so disgusting and misogynistic. I hope that Nikki Sixx gets beaten to death by a full-bodied social warrior, and in the last moments of his miserable, pathetic existence, he finally learns to respect wimyn and not treat them like his own personal sex objects. That isn’t a threat of violence, it is a promise of Social Justice, and should be 100% legal. The fact that its not is proof of the Patriarchal hypocrisy of our society.

It intrudes on female body image. As if men weren’t already in control of every other aspect of a wimyn’s life. Men in Congress already want to BAN YOUR BIRTH CONTROL WITHOUT YOUR SAY AND CONTROL EVERY ASPECT OF YOUR SEX LIFE, and now they want to force themselves into your fashion trends too, and forcing yourself on something is RAPE. I know what you are thinking, and no this does not also apply to wimyn with short hair, because if you hold wimyn back from expressing their bodies as they desire, you are a misogynistic piece of shit.

Because its “a man’s drink.” 200 years ago men who oppressed wimyn drank it. That doesn’t happen anymore, but it should still be banned because it used to happen.

Because how dare he try to steal the spotlight from a talented, independent, creative, empowered, enlightened wimyn.

Because telling wimyn to defend themselves is the equivalent of acknowledging that rape is real but that it’s not your problem. Wimyn wouldn’t need to defend themselves from constant assaults and rape if men were raised from birth to respect a wimyn’s choice and that rape is wrong. Rape is ALWAYS the man’s fault and men can’t be rape victims ever. Unless you specifically teach a man not to rape, he will do it at every opportunity because it is in his nature to use sexual violence to oppress wimyn. Instead of “Rape Mill” fraternities that condone and cover up acts of rape that happen every single day everywhere all the time, college campuses should force men to go through a course that teaches them to always do everything a wimyn says, otherwise their subconscious microaggressions may trigger discomfort, and even the discomfort caused by sexual opporession is rape. RAPE IS REAL AND WIMYN NEVER LIE ABOUT IT EVER, ESPECIALLY NOT FOR PERSONAL GAIN OR REVENGE. To even question a wimyn’s word on the matter is to further commit acts of rape by condoning the incident.

Sharia law oppresses wimyn, makes them cover their entire bodies, forbids them from driving cars, voting, wearing jeans, it mandates marriage of young girls against their will to older men who cut off their clitorises, subjugating them to a life of never being able to be seen in public without a male escort. Just kidding, feminists never take up arms against anything relevant. Besides, we wouldn’t want to offend the poor, oppressed Muslims!

The next logical step of #gamergate. Have you ever walked into a card or hobby shop on the day of a Magic: The Gathering tournament? THERE ARE NO WIMYN THERE EVER. And if a wimyn ever is there participating, it is always at the violent insistence of her slavedriver man, who wants to score social points with his “bros” while being forced to suffer though their boorish and inappropriate nerd behavior for hours. Anita Sarkeesian, why have you not punished the card players for their terrible behavior as well as the misogynistic gamers?!

Missouri has never elected a female Governor. Neither has California, New York, or Illinois, but since they are all strongholds of the Democratic party, it is in no way a representation of the War on Wimyn because only dumb, ignorant, racist, misogynistic Republicans hate wimyn. Never mind the fact that strong Republican states like Arizona, Texas, and Utah have all had Wimyn Governors, they still hate wimyn because the fat, hairy, lesbian old professor of my Wimyn Studies class at Berkley said they do.

And speaking of Arizona, Arizona is on the list too because the Phoenix Mercury won 3 WNBA championships and no one cared.

They typically look good on men but not wimyn. They were made that way by design as a subtle way for men to flaunt their ability to do anything they want in society while wimyn are stuck barefoot and pregnant in the kitchen “Where they belong.”

In both Prison Break and The Walking Dead, she is the dumb female “lead” whose only contribution to the shows are to get pregnant at the most inopportune time. This subtly implies (otherwise known as “dog-whistle misogyny) that a wimyn’s beautiful and sacred ability to bring life into this world is nothing but an inconvenience in the world of men. Sarah should be ashamed of herself for being so willfully oppressed and turned into an “Uncle Tom” of the Patriarchy’s evil message.

I would go on, but the talk of all of this wretched behavior has triggered me and I need to go binge watch Girls to find my center. Maybe then I’ll finally be considered that “nice guy” that all of my wimyn friends keep talking about. When will she notice me? 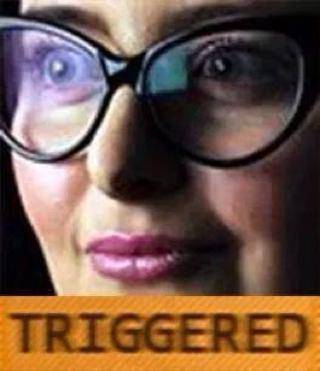 📂This entry was posted in Feminism General Pop Culture
« Stunning Football Hypocrisy With Bristlr, We Have Officially Taken It Too Far »