With Bristlr, We Have Officially Taken It Too Far

A few months ago, in the bowels of Gear Junkie a website no one had hitherto given a fuck about, the term “Lumbersexual” was coined. A Lumbersexual is a big city boy, usually a hipster, who dresses up in flannel and denim and grows long, full, and sometimes unkempt beards and mustaches. He obsesses over coffee and microbrew beer, buys outdoorsing gear from Target but is too much of a pussy to actually go out in the wilderness, and ironically embraces his role in the counter-culture-that-has-become-pop-culture circle.

The term quickly caught fire due to reciprocal shitholes like Buzzfeed and Gawker, and all of the sudden the smelly, useless neckbeards had a rallying cry, a uniting force. They banded together to turn something that was one common faire into a social movement. And where there are new social movements, there are assholes willing to capitalize on them.

Enter John Kershaw, the Brit (don’t even get me started on fucking Brits) with just such a plan to capitalize on the rising trend of ironic folicilization. Kershaw has just recently announced the launch of Bristlr, the dating site for “connecting those with beards to those who want to stroke beards.”

You make me fucking sick.

Oddly-specific dating sites are nothing new. But oddly-specific dating sites that pander to stupid cultural memes and cheapen something that was once normal are infuriatingly hipster. It’s not like I think that beards are this holy sign of manliness that deserve to be revered instead of parodied. I’m not decrying some beard-heresy here. Beards are beards, there’s nothing special about them. Some look cool, some do not. Some men can grow them and others can’t. I appreciate a good beard but I’ve never been the kind of guy to drool over and idolize the fact that men have hair follicles on their chin. Big fucking deal. Beards used to be commonplace and no one ever gave it a second thought. Then being clean-shaven became the cool thing to do. Then hipsters came along and ironically made the old trend cool again the same way they did fucking fedora hats. I fucking hate fedora hats. The easiest way to get me to fight you is to wear a fedora around me. The whole ironic beard trend is getting so bad that I want to shave my goatee out of protest, but then that would be hipstering ironically back to when being clean-shaven was the trend. You can’t fucking with with these people.

In what is surely a promotional image only, Bristlr users are shown in various stages of attention whoring, because if they used an actual screen grab of the dashboard in their PR, everyone would be terrified to sign up. There’s nothing more unsettling than logging into a dating site only to find that every user on it looks like Brian Posehn. To make things fair and more realistic, I did a retouch of the promotional photo for you to make an unbiased assessment of its users.

Pop quiz! What do Bristlr, SyFy channel, and hot sauce all have in common? All three are the product or the victim of an ongoing trend of ironic idolizing that seems to have taken a firm hold of 21st Century America. Ironic idolization. The thing that makes people appreciate the unappreciatable, specifically because it is unappreciatable. As a matter of fact, if a shitbox like Gear Junkie can invent a word, I’m going to invent a word too.

Ironilizing – Ironically idolizing. Ironilizing. Rolls off the tongue, doesn’t it?

Let’s use my new word in a sentence: Quit ironilizing shitty trends or I’ll fucking stab you.

Let’s use my new word in an example: the inexplicable popularity of the Game of Thrones character Hodor. For those who do not follow the show, Hodor is a big, useless retard whose role literally could be replaced by a donkey, because all he does is carry a cart around with a cripple sitting inside of it. Yet, despite his astonishing lack of character development or importance to anything, Hodor is celebrated as a fan favorite and is frequently mentioned in memes, apparel, fanfiction, and even nerd gear like Android Keyboard apps and trading card sleeves. Try typing “Hodor” into Google and see what happens. I shit you not: 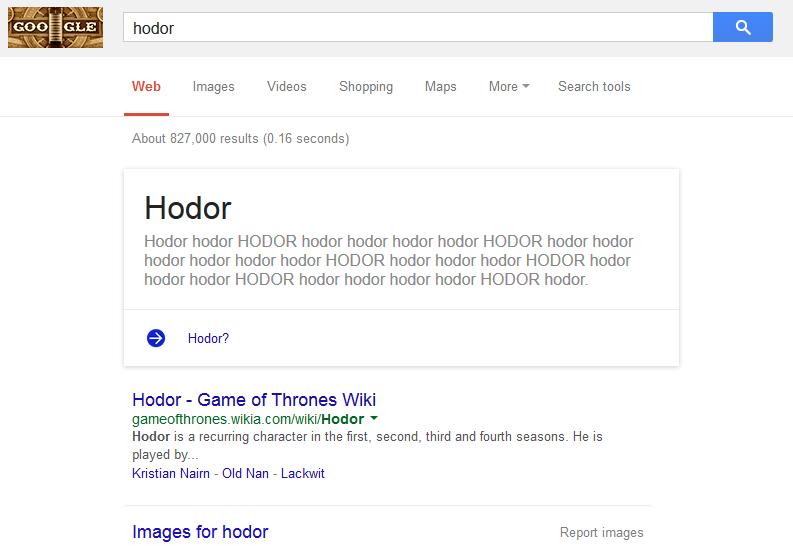 Ironilizing is everywhere these days. Sriracha hot sauce, God damn stupid fucking Star Wars, bands like Psychostick and Austrian Death Machine, Arnold Schwarzenegger himself, Sharknado, the list is endless and it pisses me the fuck off. If you can’t appreciate something for its merits, then it’s not worth appreciating, let alone buying the t-shirt for. You wouldn’t date a girl you didn’t like because she had comically small feet, so why would you shell out money for garbage that idolizes things that people don’t actually like for itself? Only pretentious douchebags would sign up for a service like Bristlr. Find me a human being who unironically signs up for a Bristlr account and I’ll kill them for being too stupid to get it.

📂This entry was posted in General Manliness Pop Culture Things That Suck
« The Next Thing Tumblr Feminists Will Protest. *Possible Trigger Warnings* The Proliferation of Bad Euphamisms »