A Deadpool Review From A Man Who Has Actually Seen Deadpool

A lot of people had a lot for expectations for Deadpool. From its initial announcement all the way through its impressive marketing campaign, every bit of PR had been so perfectly handled that any doubts a prospective moviegoer would have had were dispelled long before the lines started queuing on Thursday night. After all, any movie whose advertising strategy is talking shit to small children will automatically get my money, even if it is a documentary on the world’s eighth-most famous cobbler. 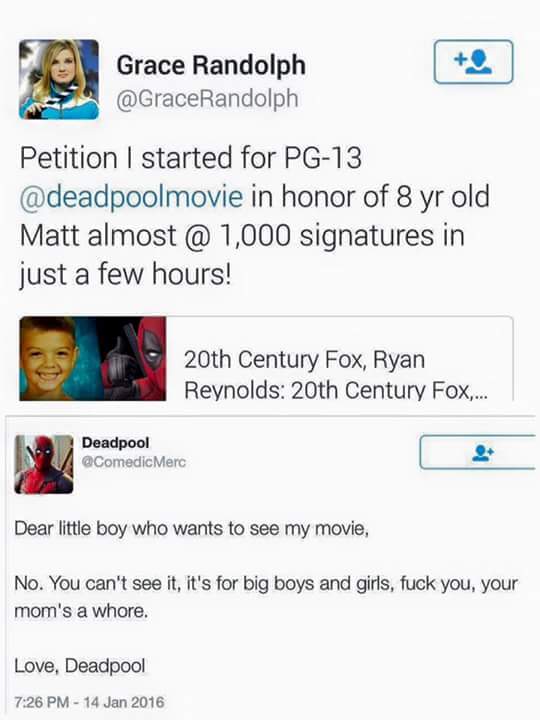 We’re off to a great start with the introductory credits, appropriately citing the film as starring “God’s Perfect Idiot, A Hot Chick, A Moody Teen, and a CGI Character.” We even get a slow motion pan across a dude’s shit-stained underwear before cutting to a few minutes of raw carnage worthy of its R rating. You haven’t lived until you’ve seen a guy get his head cracked open while “Angel of the Morning” by Merrilee Rush plays in the background. The grade A violence becomes interspersed with backstory, where we learn our protagonist used to make a living by not paying for pizza, sharing pictures of mutilation on Instagram, and starting bar fights for no reason. He hangs out with his best friends, Fat Gandalf, Timone, Puma, a few hookers, and a blind chimpanzee. They pass the time by betting on each others deaths, taking about incestuous rape, and getting life-threatening cancer together.

Shortly after, we are treated to the big reveal: There were three Taken movies. I had no fucking idea that they made a Taken 3. I bet it’s just as good as the first one.

The other big reveal: Falling in love with a hooker will give you super powers. In the movie it may manifest as incurable ugliness and baby-sized hands. In real life those super powers will manifest as crippling syphilis, tens of thousands of dollars of debt, and the power of committing suicide.

The story is fairly stock, hero saves the girl, beats up the bad guys, makes fun of people with disabilities, portrays burn victims in a negative light, and masturbates to unicorns. Colossus gets a hand job, and David Cunningham catches fire. Throughout the adventure, nearly every 4th wall is broken. Nobody is safe. Patrick Stewart, James McAvoy, and Hugh Jackman are mentioned by name, and there’s even a scene that I promise was not stolen from V for Vendetta, where someone gets all disfigured and shit, is surrounded by fire, and screams for no reason. Life must be hard and lonely for Deadpool.

What more could the Austin Powers of the Marvel Cinematic Universe ask for?

The only thing that kept this from being 4chan: The Movie was that nobody got called a faggot. There are only two things that could have made this movie better; being 4 hours long, and a scene that makes fun of Star Wars. Every movie should have a scene that shits all over Star Wars, because Star Wars is for fucking losers. Imagine watching The Martian and randomly seeing Han Solo sucking a giant black butt plug in the background. Or a cameo in Terminator Genesys of Chewbaca fucking a Doberman. It would make every movie in existence better. I would even watch Twilight if I knew that halfway through I would be able to see Carrie Fisher getting gang raped to death by lawn equipment. Star Wars sucks ass, watch Deadpool instead.