Time to bring back an old favorite! For the newer readers, the premise is simple: make fun of bands, rappers, and other musicians that suck. To catch up on whose been grilled before this, check out Part 1, Part 2, Part 3, and Part 4.

Picking right up where we left off:

Surely to be the most polarizing band on the list, because no two people can agree on precisely how much this band sucks. I don’t know what I hate about this band more, the fact that every song they write is about California, the fact that people worship Flea when he is a mediocre bassist at best, the fact that none of their song lyrics make any God damn sense, or the fact that some people somehow classify them as a “grunge” band when they’ve never made a grunge song in their career.

Let’s also talk about the fans, the real, die hard Chili Pepper fans. Have you ever noticed that not one of them can ever explain exactly why they are such a big fan of this band? It’s not like Foo Fighters fans, who can say that “the Foo are one of the last true rock bands because they rely solely on artistic talent,” or Slayer fans who say “Hey man, I gotta drink blood to something, right?” Even Lady Gaga fans can at least point to their own sexuality as a cause for liking her music. But you ask a Chili Peppers fan why they enjoy the band so much, and the closest you can get to a straight answer is “Where’d my bong go?”

Further touching on what I brought up earlier: Flea sucks. He is a mediocre bassist at best, and has never produced any truly noteworthy music during his “career” as a professional heroin addict. I can’t name a single achievement this guy has done to earn his induction into the Rock And Roll Hall Of Fame, but there he is! I can’t think of a single reason why Flea would be voted by Rolling Stone as the second best bassist in history, but there he is! What is it about this jerkoff that makes him so special? Is it because he plays slap bass? If that’s the case, where’s the lip service to Les Claypool and “Fieldy” Arvizu?

Never before have I seen a group of heroin addicts get together in a room, do whatever the fuck they want, and have it turn into a Platinum record. Their music is so disjointed and lacking in forethought that people just choose to call them a “funk rock band” because there wasn’t a legitiamte genre to throw them into. It seems to me that this perfect shitstorm of a “band” was fortunate enough to occupy a very strange corner of history when they can get such critical acclaim for such shoddy work. Is their music fun? Sure, it can be, when you can understand what their smacked-out lead singer is vomiting about into his microphone. Psychic spies from China? California rest in peace? Steak knife, card shark, con job, bootcut? Fucking poetic.

UPDATE 8-17-15: RHCP bassist Flea is trending on Facebook right now because he decided to raise bees in his back yard. All of Portland responded to the news with a resounding “We were raising bees before it was mainstream.” When I was in college, I had a beehive take over the interior panel of my hot tub. Nobody from Rolling Stone wrote an article about me.

I want to like Shinedown, I really do. When they want to be a rock band, they can put out some pretty decent sounds. Hell, they were good enough to land a feature track on the first Expendables movie, that has to mean something. So why then, is a band capable of songs like “Devour” and “Cut The Cord” so insistent on grinding out shitty, uninspired, acoustic trainwrecks? I want to have respect for their lead singer, mostly because he made an effort to lose a bunch of weight and I hate fat people. But any goodwill that affords gets flushed the moment I hear him crying about Haley’s comet, being a simple man, walking through fire, crows and butterflies, or needles and spoons, I just can’t help but imagine him as a squandered and sandy vagina, crying about everything he possibly can.

Plenty of rock bands have tried their hand at a power ballad before, but most of them draw the line at one. Even Slayer covered “In-A-Gadda-Da-Vida.” But imagine if Poison had an entire album of song like “Every Rose Has Its Thorn,” or if Axl Rose only ever sang “November Rain,” these bands would have been dropped like a deuce by their fans and ridiculed for being little bitches who don’t know shit about music. Shinedown has the potential to be a band worth listening to if only they would stop crunching out emotional, acoustic, woe-is-me crap. Until we no longer need to pick through their discography for a handful of salvageable songs, they’re more suited to play Warped Tour than then are Mayhem.

This entry may strike a nerve with you, it certainly did to me. Blink 182 was the pop-punk band that most of the people my age grew up listening to. From Cheshire Cat to Take Off Your Pants And Jacket, we were granted our teenage mischief, the catchy pop-punk and ridiculous music videos made Blink 182 just plain fun to listen to.

After the band took a hiatus in the early 2000s, they reunited in 2003 to release their self-titled album. Unfortunately, like most of the “punk” music that came out in that era, it was tainted by the growing influence of emo music. The entire album was not only terribly weepy and self-loathing, but it was also terribly written as well. In other words, half of the lyrics are about being a gigantic pussy and the other half of the lyrics made no goddamn sense. Why the hell would you write a song about missing someone you love and include the lyrics “We’ll have Halloween on Christmas” and “Spiders catching things and eating their insides?” It makes no fucking sense! Black Tide wrote better lyrics than that and their singer was 14.

Fortunately after a touring schedule, Blink 182 got the hint and decided to fuck off. Unfortunately, the trio went on to form two more shitty bands and had to badger us with their own brand of garbage for the rest of the decade. For singer/guitarist Tom DeLonge, that band was Angels and Airwaves, Tom’s creative outlet for thinking he’s Jesus. For Bassist Mark Hoppus and drummer Travis, the opportunity was called +44, a band whose music was as bland as the cuisine of the country its name references.

It took Travis Baker almost dying to get Tom to stop pretending to be the second coming of Christ and reset his relationship with his former band members. The band announced they were getting back together in 2009 and 2 years later released their sixth album “Neighborhoods,” promising it to be a return to their roots. It wasn’t. While not as self-loathing as their last album, “Neighborhoods” found whole new ways to completely suck ass, mostly by not being “Enema of The State.” Blink 182 has confirmed they are working on a new album as of this writing, they haven’t announced what musical direction they will take, most likely because they don’t want to outright lie to their fans twice in a row. At least I know better than to get my hopes up this time around.

I actually had begun to consolidate my information on this clown months ago, but I got so angry working on it that I wasn’t able to think straight enough to finish the job, so it had to be done in stages. Unholy mother of all that is wigger, where do I begin? Well, for starters, when I was teaching myself HTML 5, my very first warm up was a splash page about how shitty Macklemore is. You can see it at fuckmacklemore.com

Macklemore, real name Ben Haggerty, can be called any number of insults with validity. A poser, a cocksucker, a hypocrite an ass kisser, a wanna-be, a sellout, a racist, a bad writer, and a cheat. But the best, most encompassing thing I can think of to call him is a chump. A fucking chump. He looks like a chump, acts like a chump, and raps like a chump. I mean, look at this fucking face: 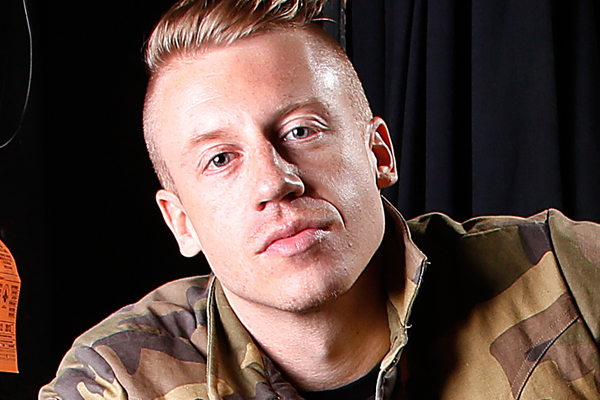 I haven’t seen a more punchable face since the first time I saw Channing Tatum on TV. As a matter of fact, if I ever have the misfortune of meeting this loser in person, I promise each and every one of you that I will punch him in the face, and then link to the inevitable TMZ article about it.

Fun fact: Macklemore paid Warner Brothers a percentage of his sales to have their marketing team push his garbage to the radio. Of course, this was after refusing to be signed to any label and famously making a statement against these very kinds of companies. He didn’t want to sign to Warner Brothers because he would “rather be a starving artist than succeed at fucked,” but he was perfectly OK using their multi-million dollar marketing machine to fling his bullshit out into the world. If consistency were dollars, I can see why this asshat needs to hang around a thrift shop.

I know people these days have astonishingly terrible taste in music, that’s why this very series exists. But even the piece of shit that is “Thift Shop” is below what I had hoped for our generation. I can write a better rap song than this chump with one in my own ass crack, but then again I’d probably have the advantage anyway because I know that “pocket” and “awesome” don’t fucking rhyme.

If you really wanna delve into how budget this asshole’s songwriting ability is, consider the song “And We Danced.” Or better yet, don’t, because I wouldn’t wish that piece of crap on the ears of my worst fucking enemy. I could walk in on my girlfriend having a gangbang with Joseph Koni, Ayatollah Khomeini, Michelle Obama, and the dog from Modern Family, and playing this song for her would still be too harsh of a punishment. I simply cannot express how inane and horrible this song is. Whoever thought the lyrics “we laughed, we cried, and we had a really really really good time” were permissible for a song on a debut album must have simply not given enough of a shit about their job to read the literature. This song is the musical equivalent of Daikatana.

Oh, and one more thing. He’s a 9/11 conspiracy theorist. Apparently that doesn’t seem to matter in the music industry like it does elsewhere. Van Jones was in the wrong line of work.